Current numerical modelling and data assimilation methods still face problems in strongly nonlinear cases, like in convective scales. A different, but interesting tool to help overcome these issues can be found in the synchronisation theory.

It all started in 1665, when Christiaan Huygens, a Dutch scientist, discovered that his two pendulum clocks were suddenly oscillating in opposite directions, but in a synchronised way. He tried to desynchronise them, by perturbing randomly one of the clocks, but surprisingly, after some time, both devices were synchronised again. He has attributed the phenomenon to the frame both clocks were sharing and after that, synchronisation field was opened to the world.

Figure 1: A drawing by Christiaan Huygens of his experiment in 1665.

Nowadays, researchers use these synchronisation concepts to reach a main goal: synchronise a model (any) with the true evolution of a system, using measurements. And even when only a reduced part of this system is observed, synchronisation between models and the true state can still be achieved. This is quite similar to what data assimilation looks for, as it aims to synchronise a model evolution with the truth by using observations, finding the best estimate of the state evolution and its uncertainty.

So why not investigate the benefits of recent synchronisation findings and combine these concepts with a data assimilation methodology?

At the start of this project, the first noticeable step that should be taken was to open up the synchronisation field to higher-dimension systems, as the experiments performed in the area were all focused on low-dimension, non-realistic systems. To this end, a first new idea was proposed:  an ensemble version of a synchronisation scheme, what we are calling EnSynch (Ensemble Synchronisation). Tests with a partly observed 1000-dimension chaotic model show a very efficient correspondence between the model and the true trajectories, both for estimation and prediction periods. Figures 2 and 3 show how our estimates and the truth are on top of each other, i.e. synchronised. Note that we do not have observations for all of the variables in our system. So, it is amazing to obtain the same successful results for the observed and also for the unobserved variables in this system!

Figure 3: Zoom in the trajectory of a variable, showing how the model matches with the truth. Blue line: truth. Red line: our model. Yellow dots: observations. 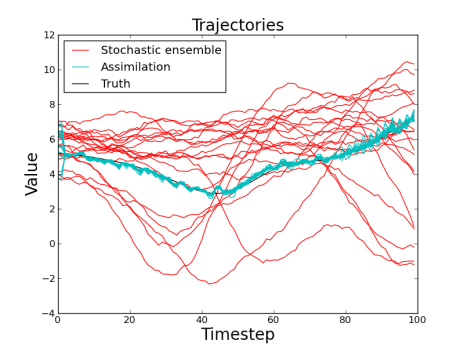 Efficient results are found with the combination between the new EnSynch and the particle filters. An example is shown in figure 5, where particles (ensemble members) of an unobserved variable nicely follow the truth during the assimilation period and also during the forecast stage (after t=100).

Figure 5: Trajectory for an unobserved variable in a 1000-dimension system. Observations occur at every 10 time steps until t=100. Predictions start after t=100.

These results are motivating and the next and big step is to implement this combined system in a bigger atmospheric model.  This methodology has been shown to be a promising solution for strongly nonlinear problems and potential benefits are expected for numerical weather prediction in the near future.