‘When is the wet season in Britain?’ a new student from Botswana asked me once. ‘Errrr, January-December?’ I replied flippantly. But in Botswana, and across much of Africa they experience one or two well-defined wet seasons per year, when the majority of the annual rainfall occurs. The timing and length of this wet season(s) is of significant societal importance; it replenishes water supplies used for drinking and other domestic purposes, affects the agricultural growing seasons and impacts the lifecycle of a number of vectors associated with the transmission of diseases such as malaria and dengue fever. Delays in the onset, or even failure of the wet season, can lead to reduced yields and potential food insecurity.

Future changes in climate will not be felt solely through changes in mean climate; projected shifts in atmospheric circulation patterns will also alter seasonality. Africa is acutely vulnerable to the effects of climate change so understanding future changes in the seasonal cycle of African precipitation is of utmost importance in establishing appropriate adaptation strategies. In order to produce reliable projections of seasonality, we require models to contain an accurate representation of current seasonality.

In our recent study we use a novel method to diagnose progression of the rainy seasons across continental Africa and identify important deficiencies in the climate simulations (a previous blog post and paper describes this method).

Firstly, when we use the method of Dunning et al. (2016) to identify the wet seasons in satellite-based precipitation estimates, atmosphere-only and coupled climate model simulations we find that the rainy seasons are differentiated more clearly from the dry seasons (shown by larger differences in the average rainfall per rainy day; Figure 1) than when fixed meteorological seasons (OND, MAM etc) are used, as this method accounts for interannual variability in seasonal timing and model timing biases. 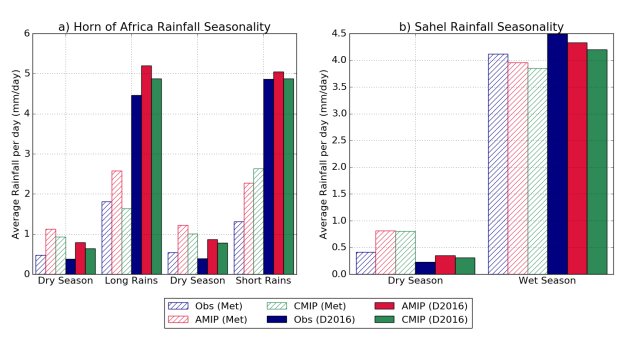 Figure 1. Average rainfall rate (mm day−1) during the wet/dry seasons over the Horn of Africa (a) and the Sahel (b) when defined using meteorological seasons (dashed bars) and dynamically varying seasons (Dunning et al. 2016, solid). See Figure 2 for a map of the regions.

Overall, climate model simulations capture the gross seasonal cycle of African precipitation on a continental scale, and seasonal timing exhibits good agreement with observations, however deficiencies manifest over key regions (Figure 2). The Horn of Africa (Somalia, southern Ethiopia, Kenya) experiences two wet seasons per year; the ‘long rains’ during March-May and the ‘short rains’ during October-November.  Whilst the simulations capture two wet seasons per year, they exhibit significant timing biases, with the long rains around 3 weeks late and the short rains nearly 4 weeks too long on average (Figure 2). Accounting for these biases may be crucial in interpreting the contrasting trend of observed declining rainfall during the ‘long rains’ in recent years and model projections of increasing ‘long rains’ rainfall in the future. 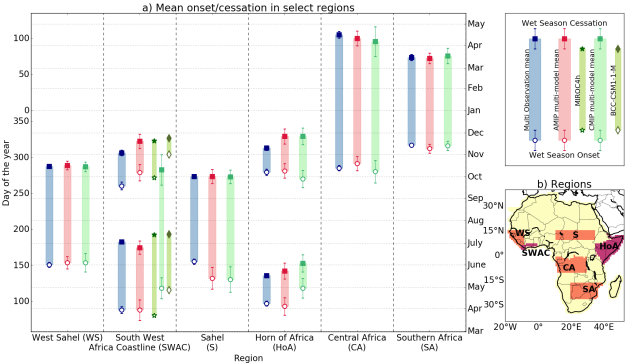 Figure 2: Multi-model mean onset (open circles) and cessation (filled squares) for observations, atmosphere-only (AMIP) and coupled (CMIP) over selected regions (b). Shaded bars indicate the period of the wet season. For SWAC the mean annual regime onset/cessation in coupled simulations is plotted, along with mean onset/cessation for MIROC4h and BCC-CSM1-1-M (coupled simulations).

The most notable bias affects the southern coastline of West Africa, a region of complex meteorology with growing population and declining air quality. This region experiences the first wet season from April-June and the second wet season from mid-September-October, separated by the ‘Little Dry Season’ (LDS) in July-August. The LDS can be useful for weeding and spraying crops with pesticides between the two wet seasons, but can adversely affect crop yields if it is too long or pronounced. We find that simulations produce an unrealistic single summer wet season, with no mid-summer break in the rains and this is linked with biases in ocean temperature patterns. Given that climate simulations cannot capture the current seasonality, future projections for this region should be treated with caution.

Figure 3: a) Location of the region that experiences the Little Dry Season (LDS; blue dots) and the SST region of interest (pink box). b) Mean annual cycle of rainfall in observations, atmosphere-only and coupled simulations over LDS region.

This work highlights important deficiencies in the representation of the seasonal cycle of rainfall by climate simulations with implications for the reliability of future climate projections and associated impact assessments, including water availability for hydropower generation, the length of the malaria transmission season and future crop yields.

The full paper can be found here: