From 17th-27th April three Reading students trekked to the to the far north to attend the APECS Polar Prediction School at the Abisko Research Station. The aims of this course were to provide a general education in the Polar climates, from ocean and ice to atmosphere to help the participants understand the issues of prediction in polar regions and contribute to the current academic push to improve our understanding and forecasting skill of these regions.

Abisko research station is situated 68°N on the banks of lake Torneträsk, the sixth longest lake in Sweden. Frozen from approximately December to June the lake provided a great base for experiencing taking observations of the poles. On the first full day we put up a met mast which we then used data from to explore boundary layer turbulence. Drilling the holes for the guy ropes to find the ice was still a metre thick was rather reassuring after people had stripped down to t-shirts in the sun.

Throughout the week we also launched multiple radiosondes which was another excellent excuse to spend some time drinking in the scenery. This caused a stir when there was an ice-fishing competition on the lake, so several local school children ended up assisting with the launch. 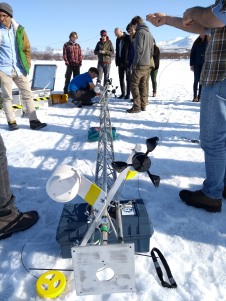 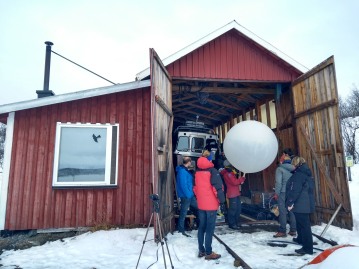 After a week packed full of lectures, from sea-ice dynamics to observations from an ice breaker, on the Sunday in the middle of the school we had the day off. Most people took this as a chance to explore a bit further afield. A few of us rented snowshoes which turned out to be an excellent idea as there were plenty of places where the snow was still a meter thick. However difficult the terrain the scenery was 100% worth it, and the kanelbullar in our packed lunches certainly helped keep us going.

This was followed by another week of lectures, covering boundary layers, clouds and much more. We also spent time working on our science communication, both to other scientists and the general public. This culminated with everyone giving a 1 minute “Frostbyte” presentation of their work.

The course was a great chance to learn about the polar climate more broadly which has been helpful in putting my PhD work in context. It’s also great to be able to say I have been to the Arctic when people ask in the future!

A big thank you to APECS, APPLICATE and the Polar Prediction Project for supporting the course as well as all the staff who gave their time to speak. More details about the course can be found here.