The aims of the NERC funded BAS run course, “A skills framework for delivering safe and effective fieldwork in the polar regions”, were to learn how to safely and effectively plan and carry out fieldwork at the poles. And in doing so, to give 16 early career polar scientists across a range of disciplines the opportunity to go to the Arctic and learn practical fieldwork skills that we don’t pick up from our day to day office work.

The first part took place at Madingley Hall in Cambridge where we were briefed as an entire cohort on planning, logistics, instrumentation, risk assessment, GPS mapping, health and safety, and were exceedingly well fed as part of the process….

The sunny early morning views that greeted us into Ny Ålesund.

Next we set off to put what we had learnt into practice in Ny Ålesund, on the Island of Spitzbergen (translates as ‘pointy mountains’) in Svalbard. Ny Ålesund is a small international village predominantly inhabited by scientists, with a peak population in summer of around 150, and a hardy winter population of 35 toughing out the minimal daylight hours and chilling temperatures, which reach minimums of around -20°C! Our journey began with three flights, and a stopover in Longyearbyen, also known as Santa Claus town, although it looks a lot more industrial than the name implies. We then had a 3.30am start which was aided by the 24 hour daylight to get the boat to Ny Ålesund. After 4 hours of queasiness we arrived at the NERC UK Arctic research station in Ny Ålesund.

The first task we had to do after arrival was the rifle training course. This felt like a dangerous activity to be doing at 2pm in the afternoon after a 3.30am start. However it is safe to say we were all sufficiently awake after the first gun shot… We never left the NERC Arctic base without a massive rucksack full of layers, food, water, flask etc and most importantly a rifle and flare gun in case of running into a polar bears. As we are essentially trespassing on the bears’ territory, it is up to us to avoid disturbing them and to use rifles for self-defence as a last resort.

Terrestrial wildlife around Ny Ålesund. The greatest wildlife threat we faced was the cheeky Arctic fox stealing our sandwiches!

In Ny Ålesund you are very far removed from civilisation, even via digital means as there is no wifi (due to a large experiment detecting quasars) or phone signal. Therefore life in Ny Ålesund feels timeless, as outside events that rampage on social media feel far removed and irrelevant. However signatures of global warming are evident, with the extent of glaciers noticeably retreating each year, and sea ice becoming a rarer and rarer occurrence in the fjord within the living memory of residents of Ny Ålesund.

From left to right: View of Ny Ålesund, the closest we came to a polar bear in the doorway of the mess building, old hut from the mining industry.

The past mining infrastructure is evident everywhere, and classified as ‘heritage’, meaning that despite thinking of them as eyesores, in the otherwise immaculate views the run down infrastructure is actually protected as part of Ny Ålesund’s history. The NERC UK Arctic base was very cosy, we definitely weren’t roughing it like all those early polar explorers! The base is run by station manager Nick Cox, who was full of stories about everything and anything. Most evenings ended with everyone staying at the base gathering together for storytime with Nick in the living room of the UK Arctic base. Everyone in Ny Ålesund went to the mess building (best view I’ve ever had whilst eating breakfast!) in the centre of Ny Ålesund for meals, and on Saturdays everyone makes more of an effort to change out of work clothes and enjoy good food and wine together before heading to the small pub which opens on Saturday nights for people to gather to drink, chatter and dance.

Every time we left the UK station we had to take an enormous rucksack filled with food (packed lunch and lots of snacks, Mars bars disappeared like gold dust), waterproofs, spare layers, emergency blanket, first aid kit, temporary shelters, spare batteries for any equipment needed, flare gun, rifle, bullets, a satellite phone (one between the group), radio (at least one for each separate group). Keeping in contact via radio is very important, even if our group was going to be just 15 mins late we had to radio in and let the people at the station now so they can amend the signing out book. There was also a radio line for all of the stations in Ny Ålesund, so everybody would know if somebody was in trouble or extra help was needed. All the extra layers were essential. In just the five days we were there, we saw sun, rain, snow, sometimes all in one day! Preparing for all eventualities and all of the `what ifs’ is essential for polar fieldwork.

We had two main projects that required fieldwork planning and execution. The first was a two day marine biology project (led by Simon Morley from BAS) which was undertaken in two boats followed up by lab work. We took sediment grabs, plankton nets, CTD profiles (measurements of salinity, temperature and density), put down traps overnight. The aim was to investigate the difference between near rivers and near glaciers, and build up a picture of the food web there. Understanding the small marine creatures at the base of the food web and their temperature tolerance has important implications for larger marine and terrestrial creatures higher up the chain. 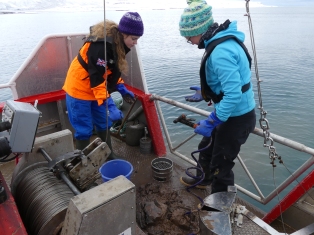 Left to right, getting our hands dirty sieving the sediment samples on the boat, putting on the immersion suits before getting onto the smaller boat in case of falling in! Photos courtesy of Simon Morley and Ed King.

The second two day task (led by Ed king from BAS) was to investigate the retreat of a glacier about 4-5km from Ny Ålesund called Midtre Lovénbreen. We carried out was to do a ground penetrating radar survey along and across the nearest glacier to Ny Ålesund to measure the ice thickness. Also, we mapped out the snout of the glacier and took photos to compare the glacier to previous years. A 15-20m retreat of the snout of the glacier relative to last year was measured!

The five or so days we had in Ny Ålesund flew by and before we knew it, it was time for us all to take the (very choppy) boat journey back to Longyearbyen before heading back to the UK. I really, really enjoyed the course, and I would highly recommend to any PhDs or Postdocs who study the poles to consider applying for the course in 2017!

Thanks to everyone at BAS involved in organising the course, in particular Alistair Crane, Blair Fyffe, Simon Morley, Ed King, Nick cox, and of course Ali Teague for organising all of the logistics and ensuring we all got there and back as smoothly as possible! 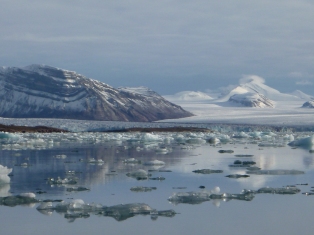