“Quo Vadis”, Latin for “where are you going?”, is an annual event held in the Department of Meteorology in which 2nd year PhD students present their work as if they were in an international conference.  In addition to providing the opportunity for students to present their research in a professional yet friendly environment, Quo Vadis has an emphasis on where on-going research is heading (as its name suggests).  Over the years presenters have always walked away with constructive feedback on their presentation style and scientific work, and occasionally, a new collaboration with someone in the audience!

This year’s Quo Vadis was held on 1st February, 2017.  26 excellent talks covering a wide range of meteorology-related topics were delivered by PhD students in their 2nd year in the one-day event.  A full schedule of the event can be found here.  The morning sessions covered topics such as Atmospheric Dynamics, Tropical Meteorology and Space Weather, whereas the afternoon sessions focused on Oceanography, Climate Change, Urban Meteorology and Data Assimilation.

Every year a winning talk is selected based on criteria including knowledge of the subject, methods and innovativeness, results, presentation style and ability to answer questions.  This has always been a tough job for the evaluation committee formed by staff members, as our students tend to be very good at presenting their cutting edge research!

A large audience listening to a Quo Vadis talk 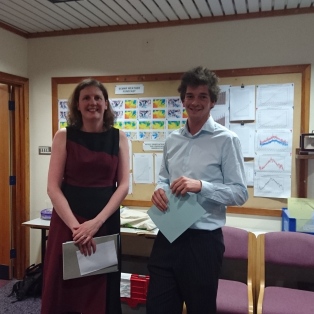 This year’s Quo Vadis winner is Christoph Kent.  He gave an excellent presentation on representing surface roughness in urban areas to determine the vertical wind profile above the surface.  Understanding wind in urban areas is essential to stakeholders in sectors such as renewable energy, construction and many more.  In addition to the winner, 3 honourable mentions were made.  They went to Jonathan Beverley, Thomas Eldridge and Elizabeth Cooper, whose talks were about the influence of Asian summer monsoon on European summer weather, the use of the Temperature Humidity Infrared Radiometer, and the use of data assimilation to improve flood prediction, respectively. 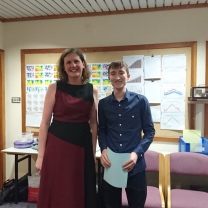 At the end of the event a buffet was served to thank all our speakers and the evaluation committee, congratulate the well-deserved winner and honourable mentions, as well as to celebrate research excellence of the Department of Meteorology.  Quo Vadis 2017 was a huge success, you can find out more about the event on our Twitter account @SocialMetwork, or under the hashtag #QuoVadis2017.

Sulphate aerosol injection (SAI) is one of the geoengineering proposals that aim to reduce future surface temperature rise in case ambitious carbon dioxide mitigation targets cannot be met.  Climate model simulations suggest that by injecting 5 teragrams (Tg) of sulphur dioxide gas (SO2) into the stratosphere every year, global surface cooling would be observed within a few years of implementation.  This injection rate is equivalent to 5 million tonnes of SO2 per year, or one Mount Pinatubo eruption every 4 years (large volcanic eruptions naturally inject SO2 into the stratosphere; the Mount Pinatubo eruption in 1991 led to ~0.5 °C global surface cooling in the 2 years that followed (Self et al., 1993)).  However, temperature fluctuations occur naturally in the climate system too.  How could we detect the cooling signal of SAI amidst internal climate variability and temperature changes driven by other external forcings?

The answer to this is optimal fingerprinting (Allen and Stott, 2003), a technique which has been extensively used to detect and attribute climate warming to human activities.  Assuming a scenario (G4, Kravitz et al., 2011) in which 5 Tg yr-1 of SO2 is injected into the stratosphere on top of a mid-range warming scenario called RCP4.5 from 2020-2070, we first estimate the climate system’s internal variability and the temperature ‘fingerprints’ of the geoengineering aerosols and greenhouse gases separately, and then compare observations to these fingerprints using total least squares regression.  Since there are no real-world observations of geoengineering, we cross-compare simulations from different climate models in this research.  This gives us 44 comparisons in total, and the number of years that would be needed to robustly detect the cooling signal of SAI in global-mean near-surface air temperature is estimated for each of them.

Figure 1(a) shows the distribution of the estimated time horizon over which the SAI cooling signal would be detected at the 10% significance level in these 44 comparisons.  In 29 of them, the cooling signal would be detected during the first 10 years of SAI implementation.  This means we would not only be able to separate the cooling effect of SAI from the climate system’s internal variability and temperature changes driven by greenhouse gases, but we would also be able to achieve this early into SAI deployment.

The above results are tested by applying a variant of optimal fingerprinting to the same problem.  This new method assumes a non-stationary background climate that is mainly forced by greenhouse gases, and attempts to detect the cooling effect of SAI against the warming background using regression (Bürger and Cubasch, 2015).  Figure 1(b) shows the distribution of the detection horizons estimated by using the new method in the same 44 comparisons: 35 comparisons would require 10 years or fewer for the cooling signal to be robustly detected.  This shows a slight improvement from the results found with the conventional method, but the two distributions are very similar.

To conclude, we would be able to separate and thus, detect the cooling signal of sulphate aerosol geoengineering from internal climate variability and greenhouse gas driven warming in global-mean temperature within 10 years of SAI deployment in a future 5 Tg yr-1 SAI scenario.  This could be achieved with either the conventional optimal fingerprinting method or a new, non-stationary detection method, provided that the climate data are adequately filtered.  Research on the effects of different data filtering techniques on geoengineering detectability is not included in this blog post, please refer to the article cited at the top for more details.

This work has been funded by the University of Reading.  Support has also been provided by the UK Met Office.

Note: So how feasible is a 5 Tg yr-1 SO2 injection scenario?  Robock et al. (2009) estimated the cost of lofting 1 Tg yr-1 SO2 into the stratosphere with existing aircrafts to be several billion U.S. dollars per year. Scaling this to 5 Tg yr-1 is still not a lot compared to the gross world product. There are practical issues to be addressed even if existing aircrafts were to be used for SAI, but the deciding factor of whether to implement sulphate aerosol geoengineering or not would likely be its potential benefits and side effects, both on the climate system and the society.