Over the past two weeks 25,000 delegates have been gathering in Marrakech to discuss mitigation and adaptation for climate change. On the 4th November 2016 the Paris Agreement came into force and as a result discussions during the conference debated its implementation. The Walker Institute and the Department of Meteorology (University of Reading), with the support of the NERC SCENARIO doctoral training partnership and an UNFCCC partnership, supported two PhD students to be official UN observers at COP22, and enabled remote participation with students back at Reading University. To find out more about our work with COP22 continue reading this blog post and check out: 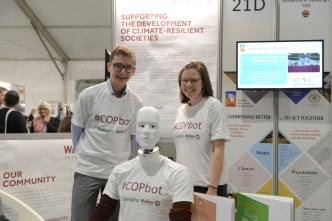 Today (18/11/16) the UK government are set to announce that the United Kingdom has ratified the Paris Agreement. Yesterday, Boris Johnson (UK foreign secretary) signed the Paris Agreement after no objections were raised by the House of Commons or House of Lords. The United Kingdom in accordance with the Intended Nationally Determined Contributions (INDCs) of the European Union, are set to reduce greenhouse gas emissions by 40% by 2030 relative to 1990 emission levels. Today also marks the end of the 22nd Conference of the Parties (COP) for the United Nations Framework Convention on Climate Change and here are some quick summary points that PhD students took away from observing the process in Marrakech:

1) The significance of the Paris Agreement.

“Now that we have Paris, we need to take action immediately”

The Paris Agreement marks a change in the intentions during the COP process. Due to the success and ratification of the Paris Agreement more discussions can be based on the adaptation and mitigation against climate change, rather than negotiating global targets on climate change prevention. The Paris Agreement states that a global response is needed to respond to the threat of climate change and that global temperature rise should be kept well below 2°C and that efforts should be pursued to limit the global temperature rise to 1.5°C. COP22 Marrakech, began by stating that this is the “COP of Action”, and therefore the focus seen during side events, negotiations, dignitary speeches and press conferences was on the need for action.

“Countries have strongly supported the [Paris] Agreement because they realize their own national interest is best secured by pursuing the common good. Now we have to translate words into effective policies and actions.”

2) A continued effort is needed to concentrate on the individual.

As SCENARIO PhD students we were challenged to understand the process that takes place during a UNFCCC conference. To do this we interviewed many conference delegates including policymakers, research organisations, industry experts, entrepreneurs, environmental consultants and funding sources to name a few. A common theme that ran through most of our interviews is that action is needed to prioritise the individual as well as thinking in terms of national- and community-level. To ensure the successful mitigation and adaptation to climate change, strategies need to come into place that protect the rights of the individual. This poses a global challenge, stretching from protecting the livelihoods of indigenous cultures and those impacted by sea level rise on low-lying islands, to supporting workers who rely on the non-renewable energy industry. In terms of climate research we need to ensure that we make our scientific conclusions accessible on an individual-level so that our work has a greater impact. 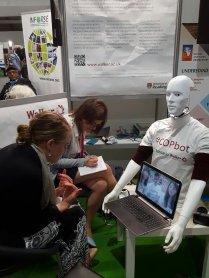 3) Action is needed now, however the Paris Agreement only implies action post-2020.

Throughout our attendance in plenary meetings and side events there was an emphasis that whilst the Paris Agreement is an important stepping stone to combatting climate change, action is needed before 2020 for the Paris Agreement to be reached. Currently INDCs are proposed for between 2021-2030, however for the intended global temperature targets to be achieved it was argued that action is needed now. Although, pre-2020 action raises much contention, with the most popular argument against pre-2020 action being that more time and effort is needed for negotiations to ensure that a better understanding of national efforts to climate change mitigation is determined.

“We need to take action before 2020. Working for action post-2020 is not going to be enough. We need to start acting now.”

“We need more time to work on the rule book for the Paris Agreement. Discussions on this should continue.”

4) There is a difference in opinion on whether 1.5°C can be reached.

For me the most interesting question we asked conference delegates was “do you think the target of 1.5°C can be reached?” This question brought a difference of opinion including some party members arguing that the change in our non-renewable energy dependence is far too great for the target to be achieved. Meanwhile, other political representatives and NGO delegates argued that accepting the target is unachievable before even trying makes negotiations and discussions less successful. There was also anticipation for the future IPCC report titled, Special Report on Global Warming of 1.5°C above pre-industrial levels and related global greenhouse gas emission pathways.

COP22 has been a fantastic opportunity for PhD students in our department to interact and understand the process that takes place during a UNFCCC conference. Whilst the past couple of weeks have been dominated by the results of the US election and the associated uncertainties, there has been an increasing global recognition of climate change and that action should be taken. In the next few years the challenge to mitigate and adapt towards climate change will be an increasing priority, and let us hope that these annual UNFCCC conferences are key stepping stones for climate change action.

“This is a problem people are recognising, and that it is time to change” 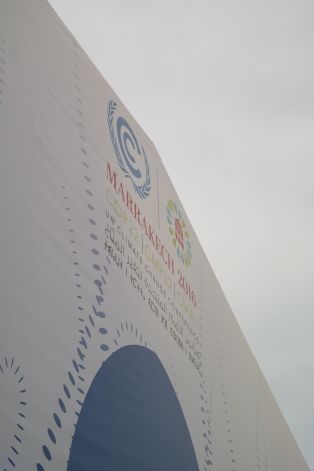 Thank you all those who have supported our work at COP22 this year. Thank you to the Walker Institute, NERC SCENARIO doctoral training partnership and UNFCCC for this brilliant opportunity. Thank you to all those who have supported us with publicity including NERC, Royal Meteorological Society, members of staff and PhD students at the University of Reading and Lucy Wallace who has ensured the appropriate communication of our project. Plus a huge thanks to all delegates and staff at COP22 who volunteered their time to talk to us.